On the Lou Reed and John Cale duo tribute to Warhol ‘Songs For Drella’ there is a song in form of a conversation (ok, most of them are on that record) that’s called ‘Work’. It’s about Andy Warhol’s Old World European work ethic battling the scene driven loitering of The Factory.

And how in Warhol’s estimation, Art is Work. And if your not producing (songs or shows or assorted tricks to trap the public consciousness), you’re not an artist. It’s not simply about being misunderstood by this world, or to call yourself an Artist as the quickest route to confuse everyone you speak too. It’s proving your work.

Your job could be your work. Your family. Your faith. Or your work could be creating high quality real Rock and Roll.

Graylight Campfire’s Dave Hogan and I started in this Rock and Roll thing together at the ripe old age of 17. Our first gigs were Teen Center battles against all comers. It was grand. We lost one, won one with a set of songs wholly grifted from UFO, our spiritual kings of the period. We dint share that fact. No one knew UFO and in our opinion, didn’t deserve to know of them. We were zealous on the subject.

Since that dewy start, we have played with and around each other. After Dave started Red One, I wrote a set of songs and sat in with them. This became The Great Upsetters, which is one of my proudest musical accomplishments. The Best Band You Never Heard Of.

Since those days, Dave has recorded a couple of my songs and he has been involved in near every record I ever produced. That’s not to say we agree on everything. And one concept we dont agree on is Work.

Dave works. He is involved as stunt guitar for more bands than I can even name, studio and live. This is because he has worked his craft to become a genius guitar player, in a variety of styles. Dave worked from being his desired place as ‘just a guitar player’ to a fully fledged front man with one of the best pure voices in the entire scene. He works every week at solo gigs in an ever expanding landscape, his name travels well. He has worked his way into a position WPKN, the greatest radio station on the planet.

I work too. But differently. I conceptualize work. I consider work. I don’t gig as much (and likely never would) cause I believe its a race to the death: you will either last long enough to have a career or perish and be recalled by barflys. I spread my words, my ideas. I believe in the better mousetrap theory, though clearly the mice are winning. So far.

Graylight Campfire is a power trio in the best usage of that term. Loud and hypnotic. The hypnotic effect comes from real live magic.

Watching Brian O’Callahan (bass & vocal) and Dave play is akin to witnessing two musical hearts in one mighty beating body. Whether pared down acoustic set or full blazing electric, these two have worked together long enough that it seems an ever continued conversation between genius minds. ‘Tight’ isnt the appropriate word. To even use that term, I would need add ‘Fishbone Tight’ and to those familiar with Fishbone, you know there is no higher compliment. And though I have yet to see new drummer Geoff Birt, I have it on good authority that…well, it works.

And for their next trick….Tomorrow, Saturday, 4/25/15, Graylight Campfire play 3 shows in one day. Will they survive? No one knows yet.

It starts with a tradition for GC, which is opening day for Little League, Short Beach Park in my actual hometown (Shhhhh…) Stratford, CT. 9 AM start time as Graylight welcomes in the spring in their own original style. 9 AM. Yikes.

And then Graylight Campfire at The Meriden Daffodil Festival. 4:45 on the Bandshell Stage. Graylight is a fantastic Festival band so this qualifies as a Must See.

And on that subject, why the FUCK isn’t Graylight Campfire playing the mainstage at the FUCKING Gathering Of The Vibes??? Bridgeport born and raised. Brilliant band. Is it really necessary to have 30 reggae bands? Really? Fucks.

And finally…. Graylight Campfire after dark at Brennan Shabeens in Black Rock. Home turf for the conquering heroes. Expect tired musicians and a fully charged crowd. And a sense of victory.

Dave Hogan is my brother. We have fought together and apart and each other. But this isnt why Im promoting him.

This week started with a question: Is there a CT Music scene?

And this question gets answer loud and clear by the Mighty Graylight Campfire: There is if you want one. 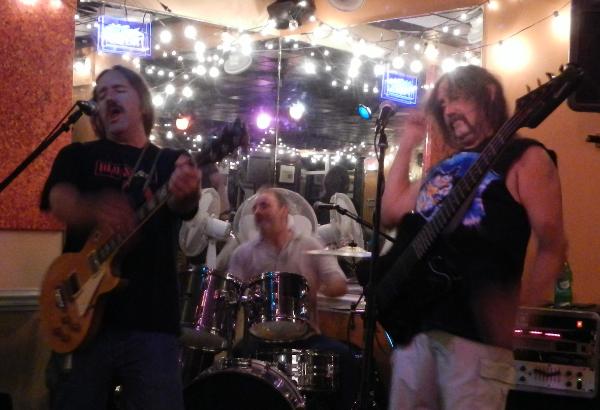