Come Saturday night, I got 2 tickets, a date and destination to go to church. OK, not church in the traditional sense. Or….is it?

I find that I don’t see shows as often as I used to. And when I do, the need to see them has changed since I was a wee lil’ Rock and Roller. When I see a show now, it is generally an artist I am obsessed with and I am seeking the same things one does with church:  Acceptance and confirmation.

My higher power comes in brilliant bits of lyric told true and a believable preacher selling/yelling them.

My benediction comes in repeated chorus hooks with words worth sloganeering.

And this Saturday night, I’m going to see Elvis Costello and The Impostors tribute ‘Imperial Bedroom’, one of my faves (of 7 alternate # 1’s) of his catalog. Preach.

‘Imperial Bedroom’ became huge to me…in time. Not initially. I did my due diligence of obsessed fandom and read everything I could about this record before I bought it, living in that ‘New Fan but The Artist Is Later In His Career’ twilight. The Artist is established, but he wasn’t always. You climb up the ladder of his/her career and review the reviews.

Because reviews are funny things, especially when such things still existed. A critic can take exception with praise lauded on a ‘Masterpiece’ and take the opposite tact because it’s:

‘Imperial Bedroom’, with a pretentious Beatle-y vibe (and actual previous Beatle engineer producing Geoff Emerich) , I could see why people lost their mind about this record, pro and con.

Coming after the aggressive and smart ‘Trust’ and the simple and kinda strange Nashville record ‘Almost Blue’, written while producing another on my top shelf of records all time ‘East Side Story’, there was a maturing happening, a start to the type of music he would do later I his career.

I was not ready for it. And keep in mind, I didn’t grab when it came out. It was after a year or two of (pre internet) research that led me to the record. And in that time, I played ‘Get Happy’ every hour of every day, which was full of aggression and sexual failure and cocaine. Just like I like ’em.

This record…confused me. It was the first Elvis Costello record that I did not fall in love with at first listen (the future would bring more of those, but hey…). It was all pomp and No Action. It was all steak but no sizzle. I was kinda heartbroken.

And clearly still dumb.  And determined to be less so. I listened to the record every day like I loved it. It was a discipline. It was healthy, in my own cute obsessive way (Do I use the word ‘obsessive’ too much? Is that something to obsess over?).

It all starts with that album opener ‘Beyond Belief’, which is simply one of his best.  I find myself in times of high stress repeating the lyrics, prayer style. History repeats the old defeats….

‘Shabby Doll’ rocks in a very see sawish, calliope way, but is RULED by Bruce Thomas (the only non Attraction in The Impostors based on a book he wrote…a real shame) and lyric that just rips to shreds the idea of love time spent is tile WELL spent. Being what you might call a whore…it always worked for me before…’

And the title track of the previous record….and another of his greatest concoctions, ‘Almost Blue’. Painful and rewarding. And it’s clearly jazz, so I’m not just making gravy here with the discourse

The standout to me personally is ‘Pidgen English’ which is a brilliant reading on the art and craft of romantic relationships, with lines so keen they cut to the quick. I can’t even describe with enough worship what this song did to my brain, so I’m just gonna leave a link here and suggest you go listen. 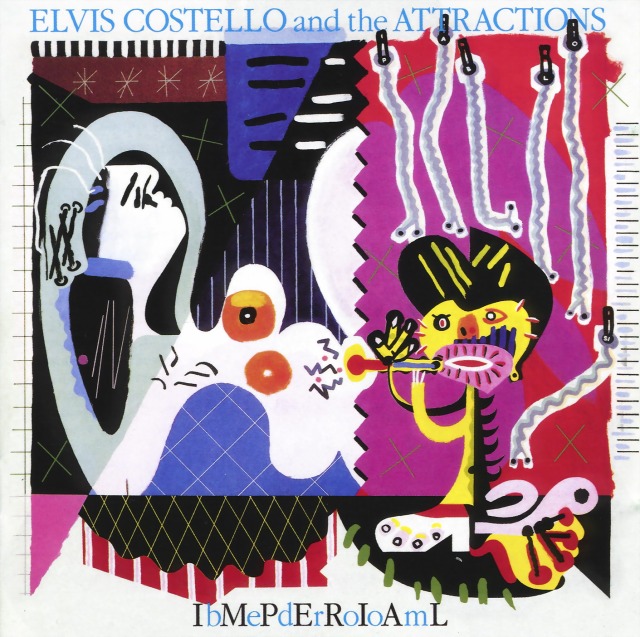